In February each year the Hall plays host to the Boston Spa Beer Festival, this takes place over 2 days and is a great event with live music and plenty of beer.  The Beer Festival is organised by the Friends of St Mary's Primary School.

So why we set up a beer festival…

St Marys School and the Boston Spa Village Hall were both in need of funds, back in 2009, for some capital developments. At the same time, the Village Hall was building toward its centenary in 2009. So a group of Dads from the school got toghether to launch the first of the annual Boston Spa Beer Festivals.

The Team (well, some of them!)

The beer festival is a joint venture between the Village Hall Management Committee and the Friends of St. Mary’s School with the funds raised used for projects at the Village Hall and the School.

The Village Hall has provided excellent service to the local community over the last 100 years. To ensure this continues there is a need to raise money to supplement normal income as the Hall is in constant need of maintenance and improvements the most recent examples are the kitchen and drainage system. The Village Hall now needs funds to upgrade the heating system, improve fire safety measures and for redecoration.

The Festival has contributed to a variety of changes at the Village Hall including bathroom improvements, roofing and the re-launch of the ceiling “lantern” in what was the old Snooker room. The Friends of St Mary’s (FOSM) have provided funds to the school, leading to the development of two new classrooms, new laptops and an all-weather play area.

The team running the Festival has grown over the years.  The original instigators of the Festival remain on the team, but there are also new members, some of whom might not be “Dads of St Mary’s” but do want to do their bit for the community, as well as, strangely, seeming to enjoy the odd beer and “crispage”!

The Festival is indebted not only to the management team, but the dozens of helpers who give freely of their time to build bars, man pumps and clean up drips. Thank you all!

Jazz in the Spa 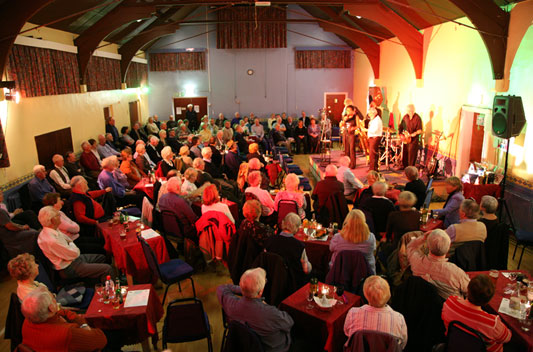 Jazz in the Spa – formerly Jazz at The Crown – began in the autumn of 1987 when the enlightened Landlord of the Crown Hotel began regular Saturday sessions alternating two local Traditional Jazz Bands. Now at the Village Hall, sessions are held every Saturday evening. We continue to present the very best of British and overseas bands plus international world class soloists. Come and Join Us. You’ll love the friendly atmosphere!