Jazz in the Spa

Aiming to restart at the beginning of August

Jazz in The Spa – formerly Jazz at The Crown – began in the autumn of 1987 when the enlightened Landlord of the Crown Hotel began regular Saturday sessions alternating two local Traditional Jazz Bands. From this beginning with modest attendances, the venture slowly flourished. 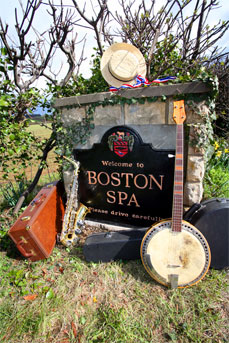 Two landlords later, two local jazz loving, real ale and malt whisky enthusiasts decided to safeguard the future of jazz on Saturdays by taking over the organisation of the evenings. This was a fortuitous decision by Tim Mallinson and Les Brown and both have gained great satisfaction from seeing their efforts over a dozen or so years mature to gain national recognition as a first class venue with what is, arguably, the most appreciative and supportive audience in the UK. During this period, the Club began to present the best UK bands from a much wider area plus bands from abroad - and attracted world class solo artists.

As with the history of all jazz ventures, two further landlords later, the inevitable happened and, following renovations at the hotel in 2003, the Club was forced to seek an alternative venue. Tim and Les were joined enthusiastically  by local entrepreneur, Ken Waller, who quickly identified the Village Hall as a potential solution to the problem. With typical energy, Ken set about to convert the substantial but relatively basic Hall facility to a warm and welcoming “Cabaret style” environment. This has proved highly successful – more space, a relaxing  atmosphere and, rewardingly, more audience – up 50% on average.

Come and Join Us. You’ll love the friendly atmosphere!

We’ll make you most welcome and we guarantee you’ll make new friends!

We'll meet you and seat you!

Don't forget to bring your favourite tipple - we provide the glasses.

For more information about Jazz in the Spa, visit http://www.jazzinthespa.co.uk/