Boston Spa village was established following the discovery of a mineral spring in 1744.  Local records tell us that John Shires a resident of Thorp Arch was cutting willow on the South Bank of the River Wharfe when he noticed a small stream. On tasting the water John Shires dropped his tools and ran to the village to tell of his discovery and soon after villagers built a tiny cottage to protect the precious mineral spring.

It was not until the mid 19th Century that village became known as Boston Spa.  Prior to this it was known as Boston in the township of Clifford and also as ‘Thorparch Spaw’ although it was never part of Thorp Arch. The village of Thorp Arch lies on the North bank of the river Wharfe and it is mentioned in the Domesday Book. It is believed to have been a mill used by brewers in Roman times. It is thought that ‘Spa’ was added to name Boston in about 1840 at the time of the Penny Post in order to differentiate the name from Boston in Lincolnshire.

In the year 1753 two things happened which would be of great importance to the development of Boston Spa, the first was the creation of a turnpike on the Otley to Tadcaster road which allowed for easier travel to the village and the second was the building of a house for the accommodation of visitors. This building was called Farrer’s Hotel; it later became The Royal Hotel, today it is The Costcutter Store.

The turnpike enabled development of a more regular and reliable coach services linking Boston Spa with York, Harrogate and Leeds. With easier transport the area became attractive to rich merchants and numerous grand houses were built, the first being St Kitts built in 1774, followed by The Terrace in 1787, Brook House in 1791 and Boston Hall in 1807; these houses all still stand today.

The mineral water came into general use in 1784 after it was submitted for analysis and approved for use by the medical profession. The medicinal use of mineral water became very fashionable and between 1810 and 1819 the Spa Baths was built.  These buildings still stand today over looking the River Wharfe and have been converted into residential use.

In 1834 The Spa Bath Company was founded with 7 shareholders and the baths and pump were fitted so that by 1850 up to 50 baths a day were being taken. It was believed that taking a Spa bath induced health benefits and it became a very popular activity amongst the wealthy.

To accommodate the visitors it was hoped would come to take the waters the village expanded and The Terrace was built between 1788 and 1790 as a Hotel but it appears only to have been so for a few years and by 1794 it was used as a boys school. The property was divided into several smaller houses and small schools during the 19th century. Today The Terrace is made up of residential properties but it maintains many of the original features.

In about 1850 another spring was found on the site of the present Wharfedale Hall, initial plans for a modest bathhouse were superseded by a rather grandiose scheme to build a hotel, baths, assembly rooms and gardens but unfortunately before it could be used as a hotel the company went bankrupt. The building also became a boys’ school and eventually it was left to stand empty for many years until 1939 when it was taken over by Notre Dame Girls School in Leeds as their wartime school.

It is often recorded that Boston Spa did not develop as Harrogate did because the railway did not come to the village but there are other reasons worth considering. Harrogate was a much older spa and there were a great many more waters, Boston Spa was established towards the end of the Spa age when sea bathing was becoming more popular and the seaside resorts developed.  The advent of the railways provided cheap travel for the masses and opened up the possibility of coastal visits.

During the war years Boston Spa became a Reception Area for evacuees and a Primary school from Leeds as well as Notre Dame Girl’s School were housed in the village and the pupils were billeted with local families. Three farms in Thorp Arch were taken over for a Royal Ordanance Factory,  which was an ammunition filling factory.  ROF Thorp Arch closed in 1957.  The site is now occupied by the British Library, Thorp Arch Trading and Industrial Estate and Wealstun Prison. New housing at West End was built during the war to accommodate the workers at ROF Thorp Arch.  The life of these houses was expected to be ten years but they still stand today and have provided homes for villagers long after the closure of the ROF Thorp Arch.

The Conservation Area was designated in 1969 initially extending over Boston Spa and Thorp Arch and in 2009 it was revised to focus on areas of the village of significant historic importance. At this time the conservation area was extended to include the West End Estate as testament to the major changes the war had on the housing and population of Boston Spa.  For more information on the conservation area click here. 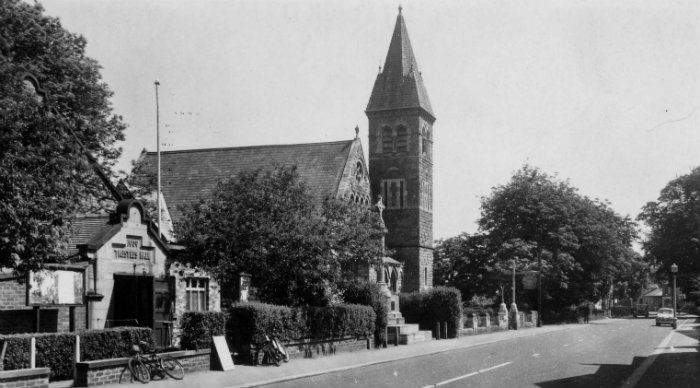 Read about the history of the Village Hall here.

Boston Spa Village hall is in the centre of Boston Spa village. View us on the map here.